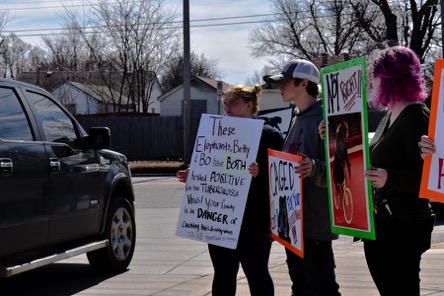 Members of the Animal Awareness Project of Oklahoma (AAPO) came together in protest of the Shriner’s Circus on Feb. 29. The protest was held from 12 p.m. to 4 p.m. at the Tulsa Expo Center. Dozens of protestors lined the entrance of the Expo Center and promoted the safety and welfare of exotic animals. Car loads of individuals varying in age drove in and out of the Expo Center to attend the circus event, some kindly waving to protesters while others ignored them.

AAPO was formed in 2016. The organization began with one woman, Brooklyn Shuck, in Oklahoma City. Shuck stood alone with a front and back sign draped over her shoulders, and held a sign promoting animal welfare in front of a traveling circus. Shuck says the mission of AAPO is to see the liberation of traveling exotic animal acts throughout the U.S.

Often people do not realize that circuses are still a very popular form of entertainment in the country today, however New Jersey and Hawaii are currently the only two states with full bans on circuses. There are still eight to 10 major circuses that come to the U.S. every year. AAPO has two goals in addition to live animal circuses in the U.S. The first goal is to inform and educate American citizens of the abuse, which happens behind the stages of live animal circuses nationwide.

Animal welfare is not the only pressing concern that AAPO highlights. The second goal is public safety. Exotic circus animals are prone to rage due to the confinement and because of the maltreatment they experience most of their lives.

Many individuals are concerned with the revenues that live circuses like Cirque de Soleil, and fear transitioning to holographic animal free circuses may not bring in the same revenue. Shuck has met with state elected officials, including Cong. Kendra Horn and Sen. James Langford. She has also voiced the concerns of AAPO to city council members of Oklahoma City, such as James Cooper, JoBeth Hammon, and Nikki Nice. AAPO hopes that a newly proposed ordinance that would ban the implementation of instruments to control an animal will be passed in Oklahoma this year.

AAPO maintains relationships with legal and political entities to further advocate for exotic animal welfare. The organization has been recently advocating and raising awareness about the Traveling Exotic Animal and Public Safety Act. This act is a bill that would amend the current animal welfare act in the U.S. If passed by Congress, this would mean the abolishment of circuses in the country. Animal and circus activists hope their efforts will generate the votes to pass this amendment.