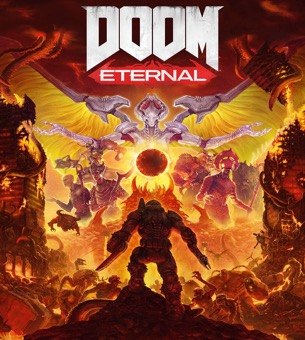 Avid gamers anxiously awaited Doom Eternal’s release for three years, but only one month from the game’s release date id Software and Bethesda Softworks announced that the highly anticipated game’s release would be delayed by four months, becoming available in March 2020 instead of November 2019.

Doom Eternal is more fast paced and chaotic than its predecessor Doom (2016). Players are now bombarded with hordes of enemies with little time to pause between ripping and tearing through levels.

The developers, id Software and Panic Button Games, have brought back older enemies from Doom 2 and added new enemies that have yet to be seen by players. The enemies brought back from Doom 2 are Pain Elementals, Arachnotrons, Archviles, and Hellified Soldiers.

However, it is the new enemies that force players to adapt their combat strategy and play style in order to survive the campaign. These new enemies are Whiplashes, Tentacles, Marauders, Doom Hunters, and Carcasses. There are a variety of weapon upgrades, gear upgrades for the Praetor Suit, and powerups to allow players to personalize the Doom Slayer’s tactics in fighting through enemies. The Praetor Suit is an armored suit worn by the game’s playable character, the Doom Slayer. This suit is impervious to almost any damage.

The surrounding environments of each level are visually striking. Although with so much action in the game it is difficult to stop and look at those environments in detail. The relentless action is coupled with very linear platform jumping and wall climbing that was unlike previous Doom games. The jumps and climbs throughout Doom Eternal will faintly remind players of Super Mario, which displaces players from what would otherwise be an extremely immersive gameplay experience.

Gordon is the same composer who mixed the original soundtrack for Doom (2016), but he was only permitted to mix a small portion of the Doom Eternal OST. There is currently a petition circulating via Change.org to have id Software and Bethesda allow Gordon to re-mix the Doom Eternal OST before its release date on streaming platforms. Gordon’s only commentary on the situation is that he doubts he will work on any projects with id Software in the future.