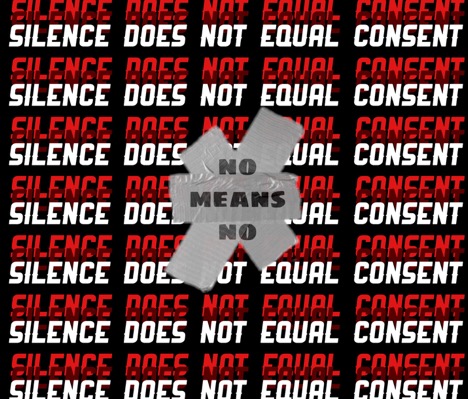 One night, a girl goes to a party at a fraternity on her college campus. She is drinking, laughing with her friends, and having a good time. A fraternity brother walks up to her and her friends and asks her to dance, and she says yes. A few minutes later, he asks her if she would like to be punched in the face. She says no. The next morning, she wakes up disoriented and finds a large bruise on her face. She reports to campus police, and the police officers ask her several questions: “Are you sure you said no to getting punched in the face? What were you wearing? How much did you drink last night?” All of these questions leave the girl confused, and she begins to blame herself for what happened. She does not know who punched her; therefore, she has no case. So, she gives up. This incident seems dramatic and like it would never happen on a real college campus, but what if one replaces getting punched in the face with being sexually assaulted?

RAINN uses the story of Tasha Wilson as the face of sexual assault. Tasha Wilson is a victim of campus sexual assault. After the attack, her perpetrator would show up places that she frequently visited to intimidate her so she would not report. Wilson had heard about others having negative experiences when reporting to campus police, so she kept her attack to herself. She later disclosed to her roommate, and then her family, and eventually support groups. Wilson was initially afraid to attend counseling because she was scared of being judged or blamed for what happened to her, but with time, she was able to accept the help she needed. Closer to home, however, one past Tulsa Community College (TCC) student shared her experience with sexual harassment at the Metro Campus. She wrote that she and her friends had issues when leaving night classes with the homeless population yelling inappropriate comments. Another college student, who attends the University of Tulsa (TU), gave details about her experiences with getting catcalled multiple times on the TU campus.

Wilson never reported to campus police, and neither did the students from other Tulsa colleges and universities. A statistic by RAINN shows that “Only 20 percent of female student victims, age 18-24, report to law enforcement”. Out of the other 80 percent, 26 percent believed that it was a personal matter, 20 percent feared reprisal, 12 percent believed that it was not important enough to report, 10 percent did not want the perpetrator to get in trouble, nine percent believed the police would not or could not do anything to help, and four percent reported the incident, but not to the police. For this reason, many perpetrators get away free and are never caught.

Higher education institutions are offering more and more resources to students to both prevent assault and give a hand to those who have been assaulted, which can help decrease the statistics of perpetrators getting away free. TU offers Reporting and Disclosure Training, which is designed to help students, staff, faculty, and administrators understand their resources and responsibilities on

campus and off-campus, as well as Know Your IX, which raises awareness on what Title IX is, what the reporting process is, and what resources it can provide to the TU community. TCC has campus police at each campus who are available to walk students to and from their vehicles at any time of day. TCC also offers information about Domestic Violence Intervention Services (DVIS) at every campus, but what if there was one universal app to help victims of assault on every campus?

Jessica Ladd is the founder and CEO of Callisto, formerly known as Sexual Health Innovations. Ladd and her team began talking to college survivors, and the resource the survivors wished they had, which led to the birthing of Callisto, which is defined as a “non-profit that creates technology to detect repeat sexual assailants”. Upon entering the site, visitors are greeted with a mission statement, “By survivors, for survivors”. Callisto campus was launched in 2015 as a way to support survivors of college sexual assault, and it is now available on 12 college campuses.

On Callisto Campus, victims are offered three options, the first one is to create a record. They are given a template to complete and save to their devices with a timestamp for when they choose to report. This allows the victims to create evidence as early as necessary without reporting to the police until they are ready. After this, they will be connected to a Title IX officer at their school.

The second option is to identify and name the perpetrator and enter the information into the system. This helps in cases where the perpetrator is a repeat offender. Once a match has been made between two cases, the victims are notified of their options as there is strength in numbers. According to Ladd, “90 percent of sexual assaults are committed by repeat offenders”.

The last option is to “Learn more”. This will lead the victim to information about reporting options, definitions of sexual misconduct and assault, and support services near them. Learning about how to move forward and seek support is very important to the healing process for these victims.

Callisto is a resourceful site with growing statistics for college sexual assaults and a shrinking number of these assaults being reported. Moving forward with a safe place to report, victims will feel safer and supported and college and university campuses, such as TCC, will be safe for everyone.