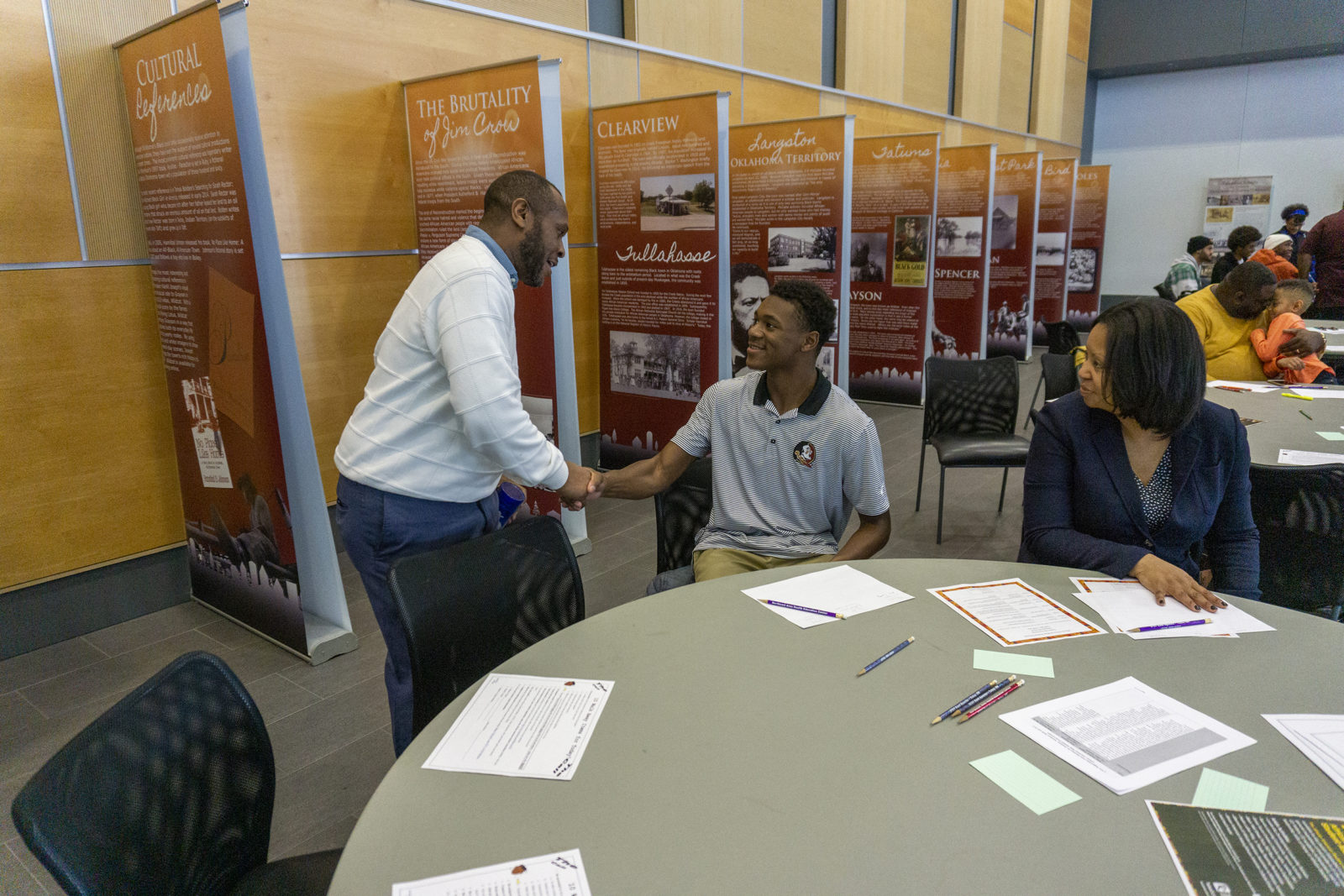 For Teren Crenshaw, he was looking for connections.

Each was among about a dozen students who attended the African American Male Student Success Summit held Jan. 20 in the McKeon Center for Creativity.

During the summit, students were treated to inspiring speeches and the opportunity to make connections with mentors from TCC’s African American community, including faculty, staff and administrators. Students signed up for mentors during break-out sessions over lunch.

By the end of the two-hour event, Crenshaw had accomplished what organizers intended for him: He connected with a mentor who will meet with him regularly, give him support and encourage him to fulfill his goal of completing a degree in computer engineering.

“I just got done talking to him a bit ago,” Crenshaw said of his mentor. “We are going to at least meet up maybe once a month or twice a month … He’s already given me some good information on who to talk to when I transfer over to Stillwater for computer engineering.”

Colbert said he hoped a mentor would help boost his accountability en route to a degree in health and human services.

“Lately, I have needed more accountability. I feel like there is not a whole lot of people that are in my circle that want to do the same things that I want to do. And so, there is really no support there. And I feel like accountability is a really, really big thing. Because if you’re not holding yourself accountable, then you know you’re going to end up like you don’t want to.”

Colbert hopes to meet weekly with his mentor to “discuss what you have done, where you can improve, what you can look forward to, your midterms or whatever it may be, and just really keeping in touch.”

Hunter said seeing other black students and adult mentors together reinforced his identity. “I think that seeing many people, many kids and so forth, of my race, it kind of feels like a connection and it feels like there was a purpose for me to participate today.”

Words and wisdom of Dr. King played heavily in the themes of speeches delivered at the summit.

State Representative Monroe Nichols, whose House District 72, includes TCC’s Northeast Campus invoked the words of Dr. King who advised that great change does not “roll in on the wheels of inevitability, but comes with great struggle.”

Nichols spoke from his own experience with struggles that remained even after being elected to statewide office and ascending to party leadership as vice chair of the Minority Democrat Caucus.

“When I travel with my white colleagues,” said Nichols, “I am more often mistaken for their assistant or their bodyguard, than recognized as a member of the Legislature. It is not fair. It is just a fact. Happens all the time. So, it really underscores why we have to really work every day not only to further our own careers, but to continue to shatter those stereotypes.”

Asked to speak on the topic of what it takes to be successful, Nichols said do not be afraid to do “the grunt work.”

“Do not be too proud to do the grunt work. I have done a lot of grunt work in my time. Surround yourself with people who are focused, hopefully more experienced and smarter than you are. Learn everything you possibly can. Bet on yourself and do not quit. Generally speaking, that is what you need,” Nichols said.

Another speaker, Curcio Smith, expressed a similar sentiment when he said that in life, “A lot of people have to take the stairs versus the elevator and that is okay. That just means you got a little bit more exercise on the way up.”

Smith serves as coordinator for the Collaborative Action Network for Impact Tulsa. He shared his experience as a college student and young adult, a path that took several “twists and turns” to California and back to Oklahoma, before he eventually settled in to complete his degree at Ottawa University in Kansas.

The summit was part of programming of TCC’s African American Male Success Team, and funded through the college’s Office of Diversity and Inclusion, whose mission includes Academic Success Coaching.

Other speakers highlighted resources like the Success Coaches as demonstrating TCC’s commitment to improving the experience of black males at TCC.

Michael Poindexter, interim vice president for Student Affairs, encouraged students to engage these resources and speak up when they need help.

Intervention services like those featured at the summit help improve success rates  for all students, but especially black males, who have persisted at the lowest rate of all groups seeking higher education, according to Dr. Dewayne Dickens, director of Culturally Responsive Practices at TCC, and a key leader in the African American Male Success Team.

A TCC study of outcomes in 2014 found that the three-year completion rate of African American males who received intervention services was 30%. The rate of those not receiving intervention was just 4%, according to the statistics distributed by Dickens.