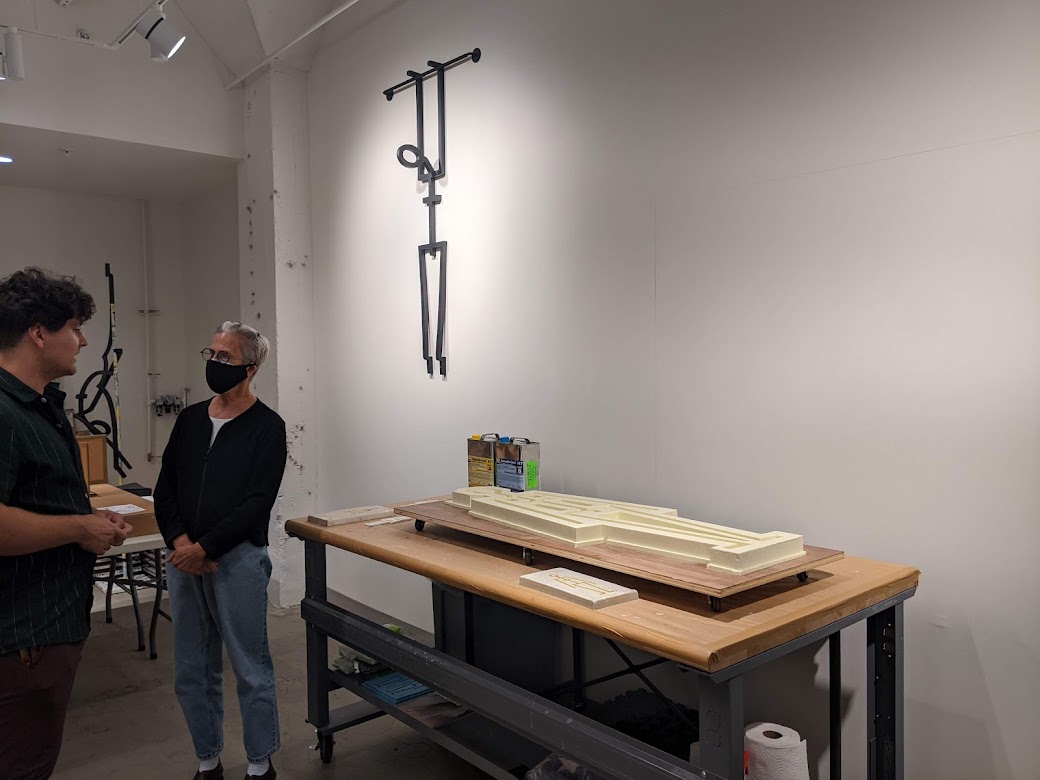 Shelby Head is the one of three creatives profiled in a series featuring artists from Archer Studios. All three profiles may be found here on the TCC Connection website.

Walking into the studio of Shelby Head, one was greeted with white walls on which minimalist metal works depicting stick figures went out of a straight line and bending all over.

Head prefers ze/zir neopronouns, and explained that “I recently completed a body of work titled “Am I that Name?” The series asks questions about queer theory using toilet pictogram-inspired figures as form and gender as the subject.”

Near one of the tables with a drill press and miter saw, was a white bicycle with a green with white polka dot helmet. Head explained the joy of a bike commute from the Tulsa Artist Fellowship (TAF) apartments. On the table laid a stack of folded fliers describing the Am I that Name? collection.

Head further explained, “There are three parts to the collection: free-standing sculptures, works on paper, and portraits of queerness though film. “Am I that Name?” seeks to educate rather than define, offering new ways of thinking about sex, gender, and social constructs through the creative power of artistic activism. The collection provides a basic understanding that queer can be essential to a person’s identity.”

Head explained, “I began researching queer theory five years ago when my youngest daughter came out as a transgender woman. This work’s unintended consequence has been exploring my gender identity.”

To Head, Archer Studios opening invited meaningful dialogue between the artist and the public, fostered a conversation in both the personal and professional community. Head said, “The evening was full of rich conversations with the general public, local artists, and art workers in Tulsa.” These conversations led to talks of the art process.

Even though Head had a metal casting license, there was no access to a foundry, leading to an innovative sculpture method. Head poured resin into the mold, and once it was semi-dried, Head manipulated the sculpture into new shapes for two hours and painted black to evoke the feeling of metal.

Head further explained, “Understanding the creative process first-hand allows visitors to see what goes on behind closed doors. Awareness of artistic process and context adds another layer of meaning, creating greater value to the work.”

Head reflected on the series, “Completion of this series is my coming out as genderqueer. Today, queerness is my identity, and my gender is fluid, changing from one moment to the next.”

The Archer Studio Open represents a lot to Head, “I love the rich solitude of my studio and the repetition of motion while creating my work, akin to practicing scales for musicians. When I open my studio door in the morning, I greet the space as a dear old friend and enter with curiosity and excitement. To understand something, I create – gaining insight into my thinking through research, material, and form.”

The Archer Studios is opened every month on the First Friday Art Crawl. More event information can be found on the Tulsa Artist Fellowship Facebook Page.