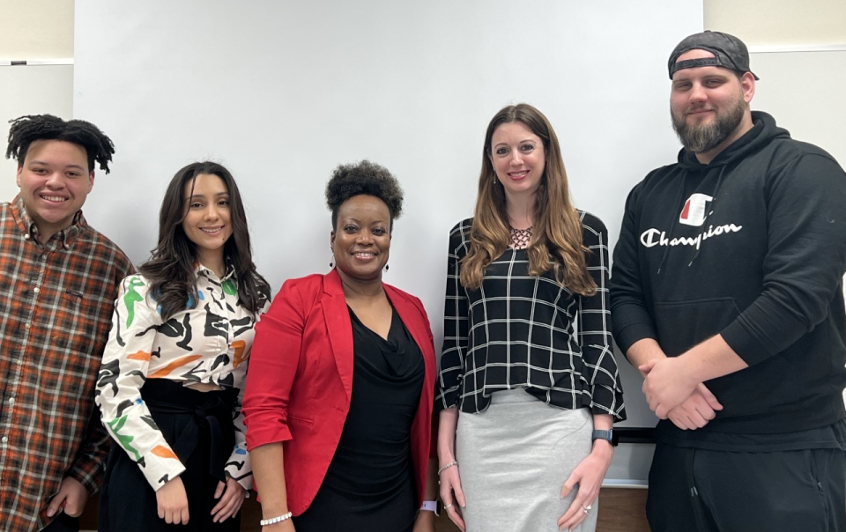 On Feb. 25 and 26, the TCC Debate and Forensics team traveled virtually to Cameron University to compete in the Oklahoma Forensics Association State Tournament (OFAST), where they won State Champion Community College. The OFAST had over eight schools attend, and its purpose was to find the best program in Oklahoma.

The TCC Debate and Forensics team is comprised of Luna Solis, Jonica King, Tanya Crutcher, and Derek Nash. The team is led by faculty member John Mikolajcik, who is an assistant professor of Liberal Arts/Communications at the Southeast campus.

Crutcher,  a novice competitor that finished as the state champion in the Impromptu speaking category, explained that her tournament involved getting a quote and having to generate a speech in seven minutes, prior to presenting. The judges required the speech to connect to three distinct categories and the conclusion had to tie everything together.

Solis competed in After Dinner Speaking and Impromptu. She explained, “after dinner is…a take on a strong topic but making it light-hearted and for people to be able to digest it easier.” Solis knew her serious topic was “gatekeeping in the body positivity movement” ahead of time, and the speech involved a stand-up element.

King competed in the International Public Debate Association (IPDA) debate. The event entails meeting with a judge, picking a topic for the debate, and researching for 30 minutes for arguments.

Nash was a judge for the IPDA events at OFAST. He helped facilitate the debates between the for and against sides. One of the topics judged was “Will Betty White live on forever,” which he found fun. When asked why he wanted to participate, Nash answered, “At first…I needed a credit to graduate, but whenever I saw the camaraderie and just the overall energy enthusiasm being on the team, it made me want to dive [in] even more.”

King has experience serving as the president of the Student Government Association (SGA), parliamentarian for the Oklahoma Intercollegiate Legislature (OIL), and as a member of TRIO Student Association. When she saw the debate team had a parliament debate, she decided to join.

The reasons why they joined the TCC Debate Team

Crutcher joined the class because she saw it as beneficial for her career to build better communication, building relationships with other people, and communicating her thoughts on the topics in our daily life.

As an experienced public speaker, Solis wanted to continue pursuing debate at TCC, and now feels she has grown as a person, met a diverse group of people, and “I learned how to own my own space.” She elaborated, “I’m a Hispanic short woman and…I learned to own that, and I learned to be proud of that…I think that’s a big thing…we are encouraged to pursue it here.”

Preparation for the competitions

The parliament debate commences with students debating for two minutes at a time, taking turns for questioning. King mentioned her weakness is getting in front of people, therefore a grilling situation of debate allowed her to build up her public speaking skills.

When it comes to preparation, and the 30-minute limit on research, King explained, “Literally it was me and the coach, [we were] brainstorming and researching…trying to get evidence so I [could] really back up my points…I was rushing down to write everything and organize everything,” King explained.

Through the competition, the debate students learned a variety of skills

“It’s really nerve-racking, but calming your nerves and controlling your anxiety was one of the skills I’ve learned to overcome, plus having my classmates there to encourage me,” King explained.

As a communications major, Nash feels this class prepared him to be a better listener, and respect diverging viewpoints.

For the debate students, the OFAST was a foundational experience

As a graduating communication major participating in the debate team, Crutcher explained, “This [competition] has been a phenomenal experience for me, just building the camaraderie with my classmates [and] encouraging each other.”  Taking a risk in participating for the first time in the event, “it really kind of boosted my confidence and myself.” She said she loved the ability to network with other students and the opportunity to compete on the state stage.

King said, “I am very proud of my teammates, I was definitely blessed with a great team to compete with.” She mentioned how Nash and Crutcher sat in on her competition and supported her.

When asked what King thought about the OFAST competition being online, she explained, “I have a heart condition and if it was in person, I probably would not have been able to compete.” One of the things King loved was that after the competition, Mikolajcik created a game to help her overcome her weaknesses.

To newcomers to TCC, Solis said, “People should take this class…to really get more confidence in themselves…we have great faculty members that helped us through.”

Nash mentioned, “Everyone put work in from day one…and [they did] such an amazing job…and I feel like they really put Tulsa Community College on the map when it comes to debate and forensics.”

For more information about the Debate and Forensics Club, contact john.mikolajcik@tulsacc.edu.