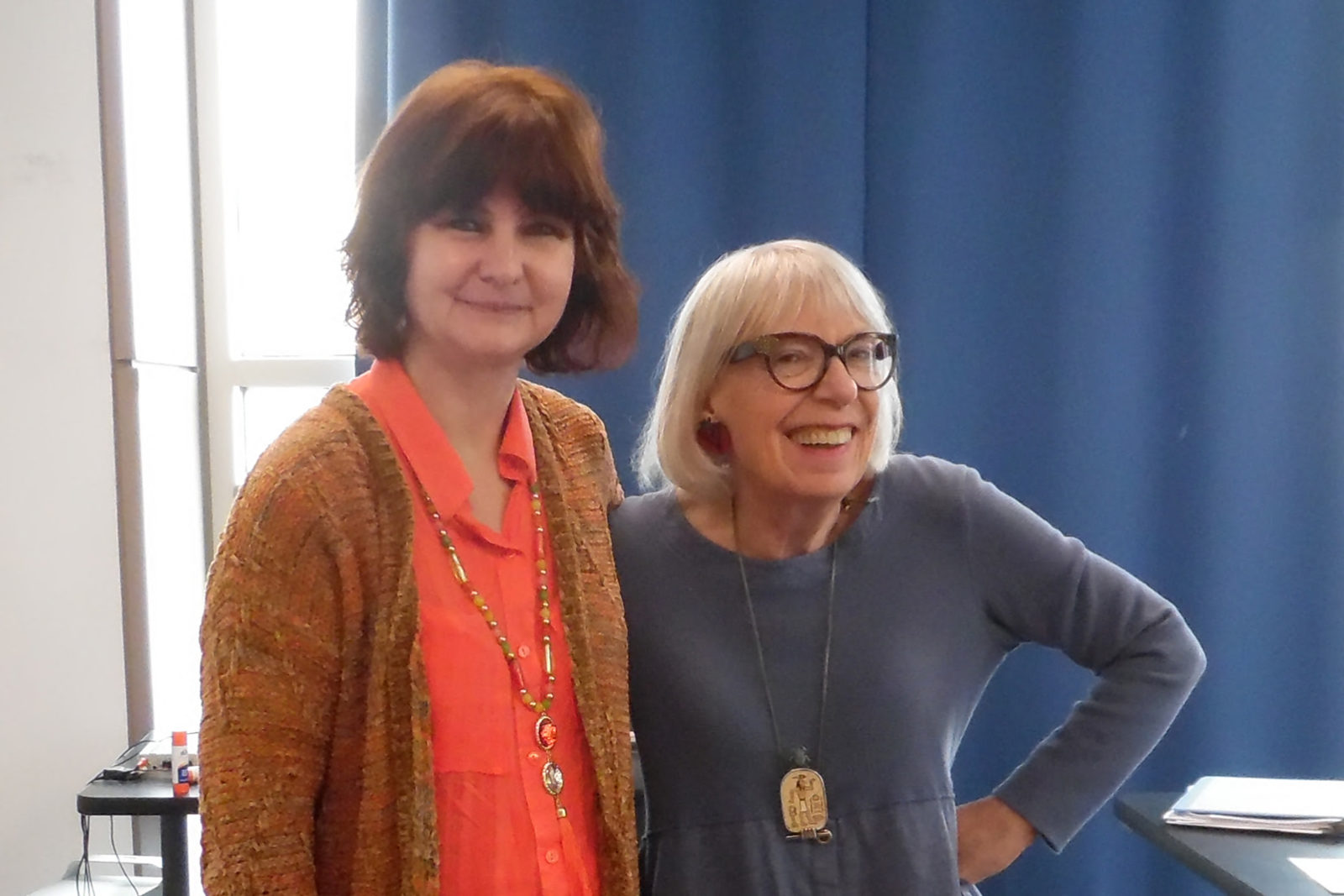 Fahrion is as humorous as the dozens of characters she has created for the greeting card and toy industries.  Strawberry Shortcake, Care Bears and Get-Along-Gang characters were animated.

After the celebrity artist conducted a workshop at the Tulsa Community College (TCC) Center for Creativity, she appeared at the Professional Practice class wearing strawberry-shaped earrings designed by an Oklahoma artist and leggings with strawberry print. A nicely styled short haircut, big glasses, and a necklace made by her deceased husband added a spice of individuality to her image.

Fahrion has had a dream to become “an artist, a mommy, and a secretary” since the age of four.

She had six siblings. Money was tight, and the kids made art from scrap and what was available at home.

“When I was a child, I was drawing and making spaceships,” she says. “My siblings and I played a “ballet” and a “mean orphanage.”

“We went to an art museum across the town in Cleveland, Ohio, where I attended free classes.” the artist remembers.

Fahrion earned a half-tuition scholarship to the Cooper School of Art in Cleveland. She worked as a model for the school and at a bakery all summers trying to pay for her college expenses. The artist graduated with a degree in illustration.

After college, the artist began her career at American Greetings card company, where she was put into art training and then transferred to the humorous and juvenile design division. American Greetings was founded in 1901 and employed thousands of people by the mid-20th century.

Farion’s job was to illustrate verses for greeting cards.

“I did from three to five designs a day,” she says.

Fahrion describes a career in art as a “tough world.” She underlines that an artist should develop an ability to present or sell his or her ideas to the management of the company where the artist works.

“You should have guts to go through an art career,” she states. “What you are selling is you.”

One of the challenges the artist mentions is to create art which consumers will buy.

“At American Greetings, we had standards that a design must appeal to 80,000 people,” she says.

From the other side, Fahrion describes her job at American Greetings as a “wonderful environment where you absorb works of artists and writers.”

Later, the artist became a creative vice-president for American Greetings.

“I manipulated 75 employees,” she jokes about her executive job.

Eventually, the Strawberry Shortcake idea transformed from a 12-card set into a series of books, clothing, dolls, toy accessories, and home decor.

Fahrion left American Greetings and went on a journey in the toy business.

“I did writing, packaging, toy design, and licensing for Those Characters from Cleveland,” she says.

In the 1990s, Fahrion moved to Noble, Okla., as creative vice president at United Design, where she “manipulated” sculptors and painters.

The artist and her husband ran a freelance studio, Big Rock Works, in Medicine Park, Okla.

Currently, Fahrion launched her own Outta Thin Air Studio in Tulsa, which offers art and design services to local businesses. One of her latest works is a design of a character for Ida Red store in Tulsa.

“Today, I reside with my two crazy terriers in Tulsa, and continue creating character-based lines including Giggle the Guardian Angel of Laughter and Cassandra the Veranda Panda,” she adds.

“Active in the vibrant Tulsa art community, I am a member of Whiteside Portrait Artists, Figure Drawing Group and Artists of Tulsa,” Fahrion concludes.