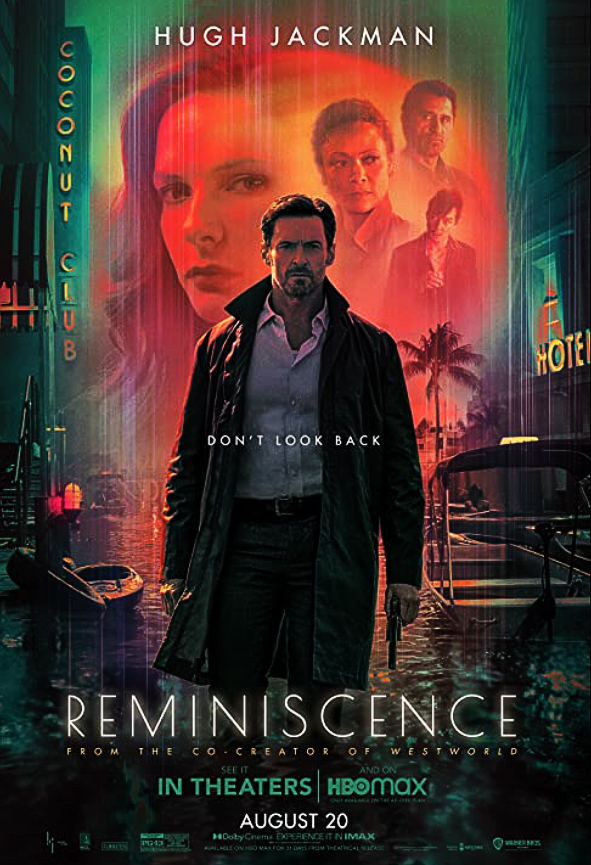 Have you ever seen “Brainstorm” or “Memento”? How about “Total Recall,” “Dreamscape,” “Minority Report” or, perhaps, “Strange Days”?

Watch those instead. Because writer/director Lisa Joy’s feature film debut, “Reminiscence,” lifts many of its influences from those films, and probably a half-dozen others I am forgetting, without doing anything interesting with any of them.

Set in a noirish, dystopian, near-future where sea-levels rising are a metaphor for the human condition, and the heat has driven people to live nocturnally, “Reminiscence” tells the turgid tale of Nick Bannister (Hugh Jackman) who, with his sidekick, Watts (Thandie Newton), run a sort of neurological datamining business, recording their client’s memories—happy, or otherwise—so that they might relive them, ad infinitum.

Nick is instantly smitten when a new customer, and apparent femme fatale, Mae (Rebecca Ferguson) saunters in with a simple request to help find her lost house keys. What follows is a time-hopping, non-linear romance that aims to entice us down a rabbit hole which is far more convoluted than “Reminiscence’s” robotic execution can handle.

It’s not as though there are not examples of how to do this kind of thing right (see the first six flicks I mentioned). And it is not like I am contemptuous of derivative films. Nothing is ever really new under the sun. A good example is James Gunn’s 2006 horror/comedy “Slither,” which is largely lifted from the 1986 cult classic, “Night of the Creeps.” Gunn doesn’t even do a lot new with that one, but (and this is key), it is actually fun to watch.

Sadly here, not so much. Lacking any real sense of momentum for the first hour, “Reminiscence” suffers from telling instead of showing, and overestimating how potent its themes and characters really are—the first half comprised of lifeless scenes where seemingly little of consequence occurs, punctuated by wide-tracking shots of a half-sunken Miami substituting for thematic depth—while we are all waiting for some, or any, action.

The problem here is a structural and conceptual one. This is essentially a classic noir. There is a superficial subplot about the shady machinations of affluent “dryland” owners, but the limp narrative (along with a lack of chemistry between Jackson and Ferguson) provides little reason for us to feel for Mae as Nick does.

Not to mention some of the hilarious bits of dialogue on display. When Mae disappears early in the film, a distraught Nick exclaims, “People don’t just disappear!” My first reaction was, “Of course they do. Like every day. By the thousands.”

“Reminiscence” is largely a style over substance affair. The worst issue is how poorly defined the timeline is. The writing and direction are one problem, but the editing does nothing to help the confused dramatic beats. Quentin Tarantino, across his influential lexicon of celebrated films, writes non-linear stories for almost every movie he has ever made. But he also knows how to keep an audience from getting confused, bored, or frustrated.

There are a couple of bright spots. Thandie Newton is great as Watts. She and Jackman’s chemistry are what kept me going, and the film suffers in her absence. Cliff Curtis, as a corrupt cop, always brings his game face. There are a few neat, mind-bending concepts (as to be expected from Joy, who was a writer/producer on HBO’s “Westworld”). But they are drowned under a raft of threadbare conventions, and an utter lack of tension.

“Reminiscence” is what would happen if the holodeck from “Star Trek: The Next Generation” became sentient and made a movie.

This review is dedicated to Michael Smith.