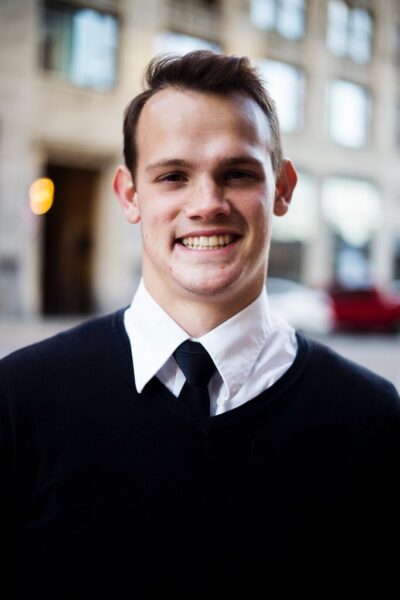 Joe Tomlinson, former assistant managing editor for the TCC Connection feels grateful for his experiences at Tulsa Community College (TCC.) Tomlinson is a student at the University of Oklahoma and was selected for an internship at Gaylord News in Washington, D.C. which will last until May.

“I first heard of the Gaylord News to D.C. program from a professor of mine, who was on the interview panel. He enjoyed my work and I spoke to him during his office hours, and he recommended that I apply for the program,” Tomlinson said.

Tomlinson said that the only requirements for the program were to be a student at the University of Oklahoma in the Gaylord College of Journalism and Mass Communications. It was also important to be in good standing and to complete the Multimedia News gathering course prior to applying.

When talking about preparing for the program, Tomlinson reflects on his experiences at the TCC Connection, the college newspaper of Tulsa Community College. “TCC, and more importantly the TCC Connection, allowed me to get an early feel for journalism that I likely would not have had elsewhere. My first introduction to journalism was through the Connection, and Mr. Goodwin as well as a few of my colleagues helped me find my footing very quickly. With the smaller staff at the Connection, it was easier for me to ask Mr. Goodwin questions, allowing me to navigate the weeds of (Associated Press Stylebook standards), creative leads, and many other things. At a larger university like OU, I simply would not have had that luxury,” Tomlinson stated.

Tomlinson said he wants to get the most out of the program by writing fulfilling and impactful articles. He initially wanted to pursue sports writing, but he found it did not fulfill him as he had thought. “This program is giving me the platform to write stories on legislation and events that impact Americans and more specifically Oklahomans during a massive shift in political office, and truly a momentous era of American history,” Tomlinson stated.

Tomlinson offered the best journalism advice for those students considering journalism   as a career. He said to “think outside the box” when looking for stories. Tomlinson stated that getting involved in organizations, taking part in events, or even taking a different route to work or class can open up doors to remarkable stories.

“The best general advice I can give to young journalists is to run your own race. Do not compare yourself to others, and just focus on your writing one byline at a time. Do not be discouraged by other great writers, be inspired by them. Recognize that the pieces you write are important, and if you do not think they are important, then you should not be writing those pieces in the first place.

“The impact that the TCC Connection and Mr. Goodwin had on me and my young career in journalism cannot be overstated. I cannot thank them enough,” Tomlinson said.