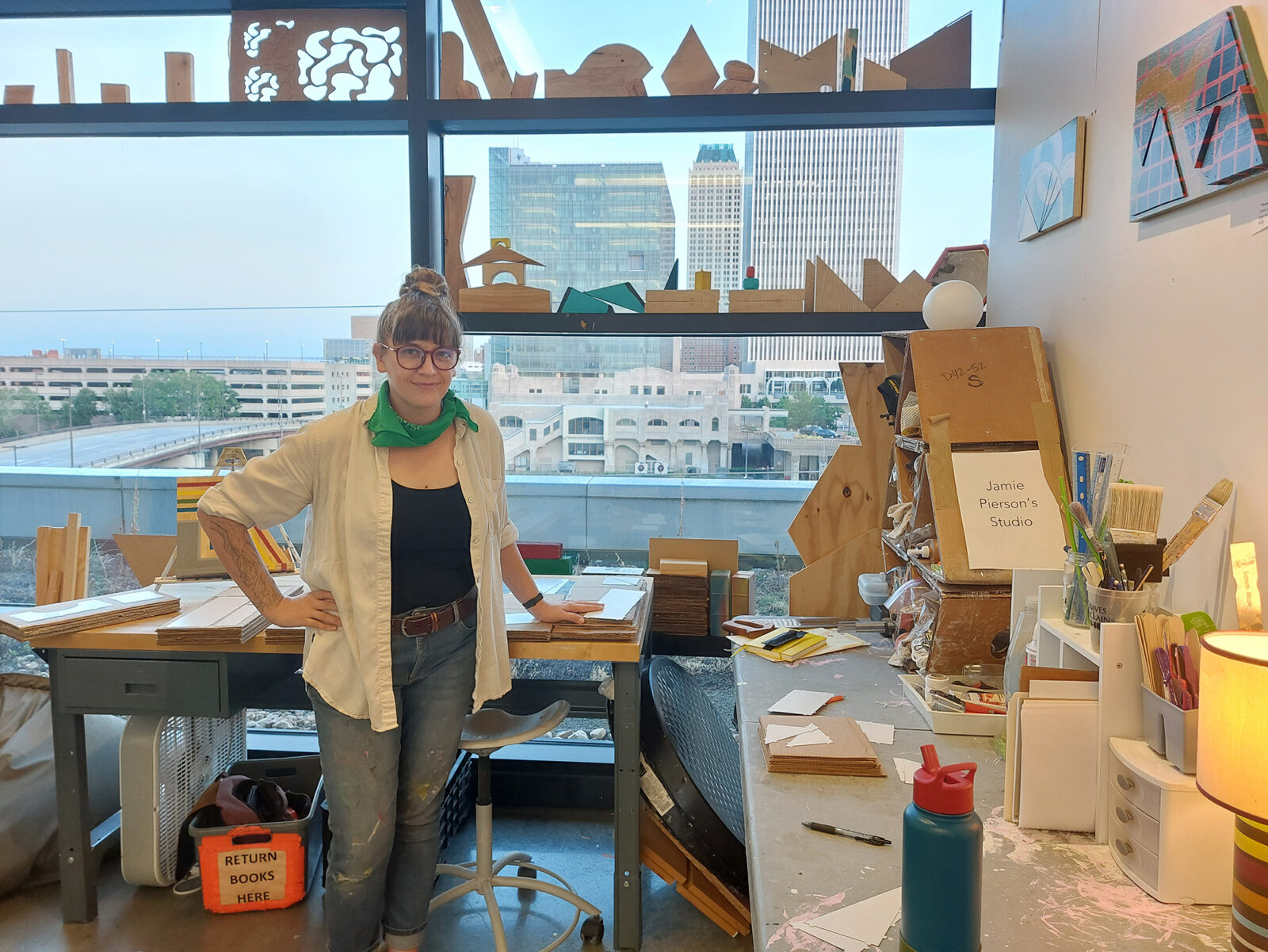 As the ahha goers rose up in the elevator to the 4th floor of the ahha Tulsa building, they were greeted with large triangular cardboard structures by Jamie Pierson, a designer, artist, and community organizer who runs Scraps Design. Her intention with these structures at the Open Studio: get adults to creatively express themselves.

Pierson explained, “Well, so it’s interesting because I set out with the intent for this project to be aimed at adults.” Many adults assumed the blocks were for children, though Pierson explained, “It’s very interesting to see the reactions because some [adults] will be like: ‘Oh, really?’ And I’ve just given them permission to play and build and some [adults] will give me a look like: ‘Are you kidding me?’”

Pierson’s artwork is largely defined by simple shapes and bright colors that many Ahha Tulsa goers found joyful. When asked why this was a fundamental basis of Pierson’s style, she explained, “They started becoming part of my art because structurally they are simple and strong. [At] the pop-up playscape … I was experimenting with a lot of different simple shapes that I could use to build quickly and cheaply and durably and triangles ended up being it.”

The style that imbued her murals, for example, at Tipton Community Garden in Kendall-Whittier gravitated toward a simple bright color design for the mural so community members could easily paint it themselves under Pierson’s leadership, because, “any skill level can pick up a brush and contribute.”

Peering into the studio space, with the soft yellow light of the desk lamp, the walls were adorned with paintings with bold bright colors and flowing shapes. The play wooden and cardboard blocks were on the windowsills facing downtown Tulsa.

Pierson, the urban planner, naturally became Pierson, the community organizer. Noticing the segregation of north Tulsa from economic development in downtown Tulsa by Interstate 244, she now works as part of the Typros Urbanist Crew, building consensus on all sides for the removal of I-244.

Once she took over leadership of the Urbanist Crew, she did a comprehensive outreach survey, which led to the creation of EAT36STN Food Truck Park in 2021.

The mission of Scraps Designs is to use creativity and play to create more equitable and human-centered communities. Pierson was enthusiastic to talk about how Richard Dattner, an architect, playground designer, and play thinker, inspired her with his book, “Design for Play.”

To her, “design is art with rules,” because her work as a designer involves creating art that fits into the parameters of community..

Many of the structures she uses for public art projects were initially used for her personal urban design brainstorming. She explains her “design is play” vision, [where] “they have to use their same creative muscles but within the structure of the needs of the people they’re working with … you give yourself rules in any kind of play.” She used the example of playing house and making rules about who does the laundry and who sets the table.

The material Pierson created for her blocks also facilitates play. Her process was getting good condition cardboard, arranging them by size, gluing them together, and stacking the cardboard. She called this material “clumber” because of the ease of cutting it with a saw.

When asked why she preferred this material, “it’s essentially free … it’s not free in my labor but … wood logging is not always sustainable.” She further explained, “a big part of why I started working with cardboard, besides all these other issues is, I wanted to build big things that would still be accessible to people with limited mobility or for small children. I wanted to be able to create toys and playscapes that would be able to move and interact with regardless of physical abilities, and cardboard is extremely lightweight.

Her ultimate goal with the playscapes: get people to reclaim public space away from cars and learn to own the places they inhabit. In terms of projects, Pierson has a grant from the Living Arts to paint a mural based on the educational work of architect Bruce Goff, and doing a chalk mural on the side of Ahha Tulsa for Suicide Prevention Day on Sept. 10.