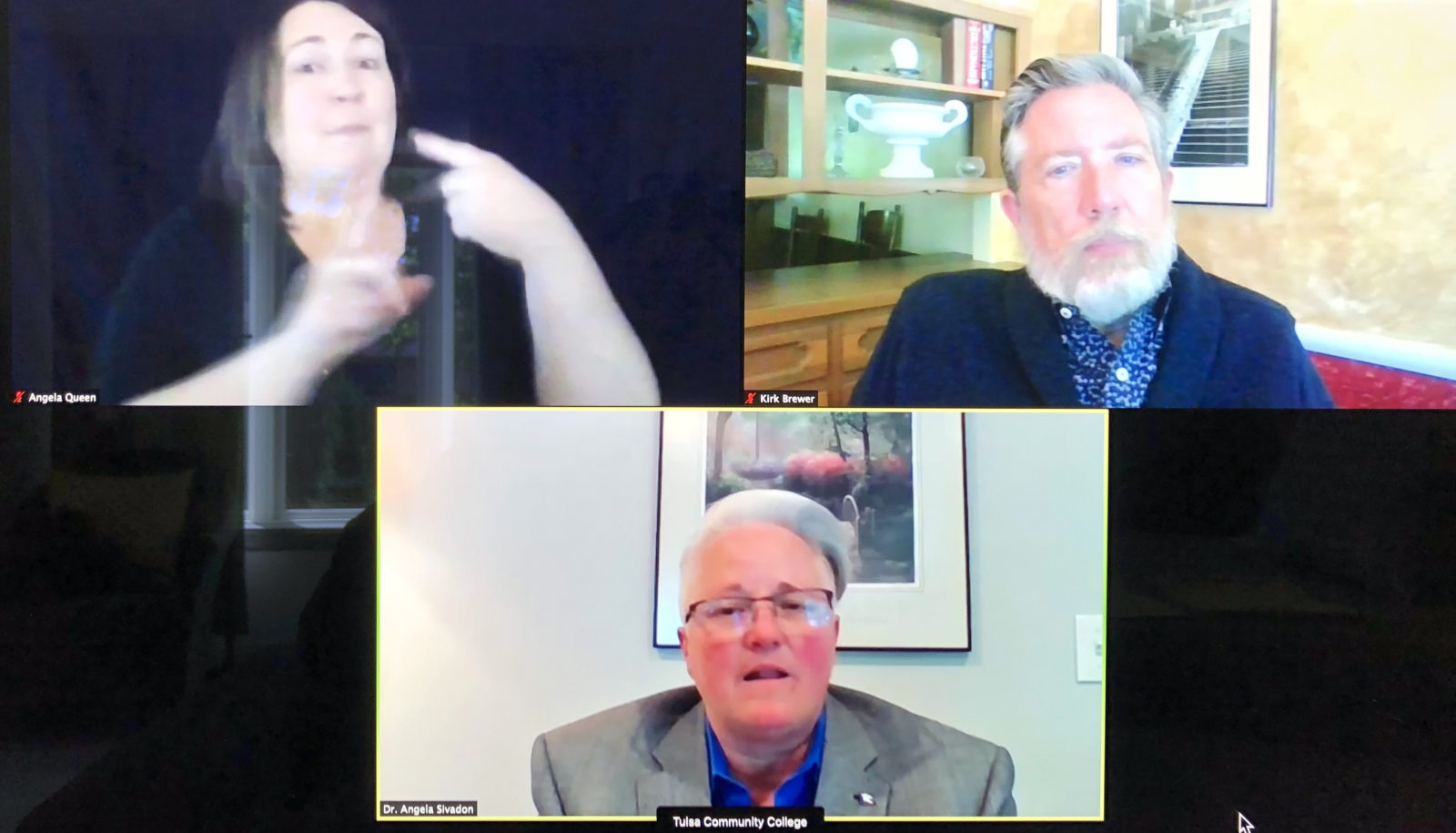 Note: The TCC Connection is reporting on open forums featuring the four finalists for Senior Vice President and Chief Academic Officer. The forums were held April 27-30. Previous stories on the finalists are linked on the TCC Connection website.

If you wondered whether you could come to Tulsa Community College and one day be interviewing for the college’s top academic position, then consider the story of Dr. Angela Sivadon, who did just that.

Sivadon, current Metro Campus provost and former professor and dean in the School of Nursing, is among the four finalists to replace retiring Dr. Cindy Hess as senior vice president and chief academic officer.

Sivadon spoke via Zoom at an open forum April 30, as part of the interview process to head academic affairs at the college, where she started as a student in the early 1990s.

Sivadon recalled that she tried to go to college three times before she persisted to earn her first degree from then Tulsa Junior College. After 14 years as a nurse, she acquired additional degrees and eventually returned to teach at TCC.

“TCC has been a very positive influence in my life … TCC has given me the opportunity to have a second career as an educator. And so, it holistically has really served my whole life for me and met those needs and showed me the opportunities that are there, and I’ve met a lot of people and have had a lot of great experiences,” she said.

Throughout her talk, Sivadon spotlighted several TCC programs to put all students on successful pathways, like the Tulsa Achieves scholarship and the First to Finish program for first-generation degree seekers — a program that she herself enrolled in as a student.

Sivadon also touted TCC initiatives like Smart Start in health sciences to help students find the right fit for their careers. In fact, she would like to see Smart Start expanded to other academic fields, including liberal arts.

“I definitely see how we could take this model and really apply it to much more across the college and serve many more students with it,” Sivadon said.

Asked how her background would prepare her to be a leader in promoting diversity and equity, Sivadon expressed pride in the “Out for TCC” initiative to recruit LGBT students, a partnership with Oklahomans for Equality, of which Sivadon is a past president.

“Tulsa Community College was the first higher ed organization in Oklahoma to specifically target recruitment with LGBT students,” Sivadon said. “And so, we connected with Oklahomans for Equality, and the first time we had it (recruiting event), I think we had like 22 or 25 students show up, and we had over 200 students that showed up last time.”

Sivadon said the effect of diversity and equity programs is that students see more peers and professionals who look like them around campus and feel a closer bond to the college experience.

She encouraged more outreach to recruit faculty from diverse backgrounds and have equity champions in hiring roles.

Equity, too, should guide not only what is offered in the curriculum, but where it is offered at a campus close to them, she said.

Sivadon advocated for conversations and personal relationships in order to gain appreciation of diversity.

“I feel diversity is more than the eye can see. I think that we don’t know the diversity of the people sitting next to us sometimes, you know, because we need to ask questions, we need to talk to people. Our cultural upbringing or experiences, you know, that’s what shapes all of us,” she said.

A former Faculty Association president, Sivadon was asked how the college can better support adjunct faculty. She immediately responded by calling for increased compensation.

“Adjuncts need to be a big focus in the very near direct future. We have to figure out how we can compensate them better,” Sivadon said. “And we have to figure out how we can include them in more of our activities and our committees and some of the conversations that we have … I’m pretty sure that because of the wages that are available, most adjuncts do this because they have a passion about teaching students and taking that knowledge they have and passing that skill on or whatever that may be.”

She said one of her first actions as chief academic officer would be to meet with “focus groups” of faculty about what they feel are challenges and successes.

“If we can engage those individuals to find out what they’re thinking, there might be the sleeper million-dollar idea out there that we don’t know about that someone’s keeping inside. … The more that we can expand our knowledge of what faculty are thinking and going through, then the better off we can be in making better decisions.”

In her time at the School of Nursing, she led creation of the cardiovascular technology program, an accomplishment she highlighted in her forum presentation. Her resume reflects scholarship in health and nursing, service on numerous faculty committees, and lengthy civic engagement.

Search for candidates began in January

The finalists were identified by a TCC search committee of eight faculty and administrators in various disciplines who began their work in January following the announcement that Dr. Hess would retire Aug. 1, according to Dr. Kristopher Copeland, provost at West Campus and chairman of the search committee.

“A national search was conducted and we had over 50 people apply. The original pool of candidates was narrowed down to around 20 applicants that met all qualifications. The screening committee narrowed the field of candidates down to 8 and conducted interviews. The committee then made a recommendation of finalists,” Copeland said in emailed comments to the TCC Connection.

He said based on feedback from the TCC community, the committee was seeking someone who is “a strong collaborator, communicator, and visionary. Additionally, qualifications required included multiple experiences/years as an upper administrator, earned doctorate, guided pathways experience, etc.,” according to Copeland.

Feedback surveys on the open forums are being circulated, which allows the college an opportunity to provide feedback on candidates. Once that is complete, TCC President Dr. Leigh Goodson will review and make a final decision, Copeland said.  He said the timeline for hiring and start date will depend on multiple factors not yet determined.