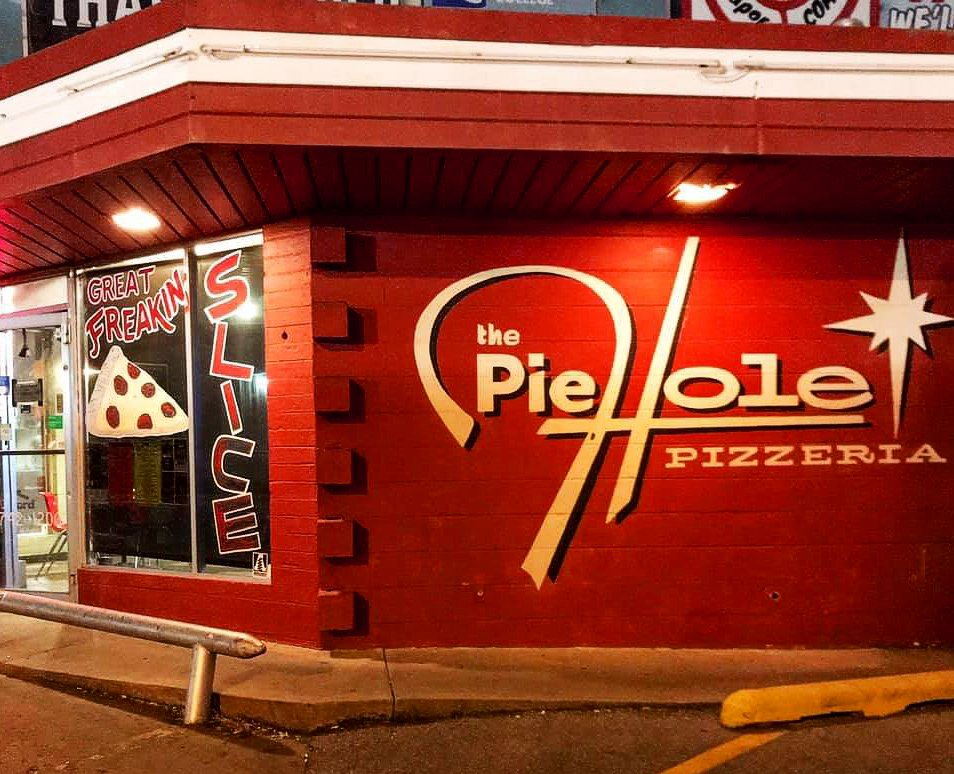 Originally founded by bar and restaurant entrepreneur Zachary Matthews, before being sold to current owner Andy Park in 2014, it was always a place that (as an expat New Yorker myself) felt close to the homeland. A thin crust pie, with a puffy edge. A certain crispy, aerated chew to the interior that blows up just enough on the perimeter. Those satisfying layers of texture are all key. I don’t care how upscaled the ingredients on top might be, if the crust sucks, the battle is already lost. It’s like 75 percent of the deal.

Fortunately, Piehole has that covered. And in a wide variety of toppings.

I’ve been indulging their formerly $10 Tuesday deal for years (now $11, inflation happens). It’s a 16-inch, two-topping pie, reliably delivered by their charming in-house staff, which winds up being about 16 bucks—plus tip. Always tip your drivers.

In that regard, it’s the best pizza deal in town on a Tuesday. My preference is for salami, black olives, and roasted red bell peppers (extra toppings are $.35). Their prices have always remained modest, considering the quality.

And to a degree, I’ve never strayed much from my regular deal. I’m glad I did, though.

Among their gourmet slate of pies, and inspired by this review, I stepped out of my Tuesday comfort zone and tried the White Pizza, the Pesto, and their signature Piehole Classic—as well as the asiago garlic bread, calzone, and a couple of their salad selections.

Of the pies, the Classic and the White were fantastic. The latter is sauced with alfredo and topped with artichoke hearts, mushrooms, smoked Italian ham, sausage, tart capers, and a healthy dose of mozzarella. The crust was amazing, light, and airy, and that texture combined with the eclectic, savory toppings were a knockout. I had to lean against a countertop.

The Classic is also something I wish I hadn’t denied myself for so long. Their signature pie, with their poppy, all-purpose tomato sauce, carries a pleasing balance of sweet acidity and oregano, along with a pile of pepperoni, sausage, green and roasted red bell peppers, onions, mushrooms, black olives, and awesomely copious amounts of fresh-roasted garlic with a thick layer of mozzarella. Bellissimo.

The Pesto wasn’t as successful. The crust was as uniformly good as the others, and the goat cheese was tangy, as well as the fresh bright tomatoes. But the pesto had no punch, and the chicken was bound to be dry. Not really a flatbread in this form factor, but it should be.

The calzone takes on a different form, too. If you’ve ever seen Costanza delivering one to Steinbrenner on “Seinfeld,” it’s basically a pizza pocket that you can fill with almost anything—sauce, cheese, meat…and eggplant apparently. Here, we have that form, but pre-sliced with sauce on the side, closer to a stuffed bread. Tasty, but not traditional. The base model comes with ricotta and mozzarella and your choice of innings. (They can’t be toppings.) I went with meatball and pepperoni. It tasted great, especially when dipped in the accompanying sauce. The asiago cheese garlic bread was another winner.  A crispy/soft amalgam with subtle garlic tones, piquant cheese, butter, and oregano. I could eat it all day.

I’m not a salad guy. Piehole keeps them simple. Fresh greens, and whatever else might go into it, with a requisite packet of sauce. But I’m all about due diligence.

The Cesar was the simplest. Fresh baby spinach, with grated parmesan and dressing. Get it all together in the clamshell, shake it up, and you’ll be good. The Greek was a more satisfying affair, with its mixed greens, feta cheese, kalamata olives and sun-dried tomatoes.

Piehole has been around. It’s a neighborhood place. After surviving the last year, when many restaurants fell, they now seem stronger than ever. There’s definitely a reason.