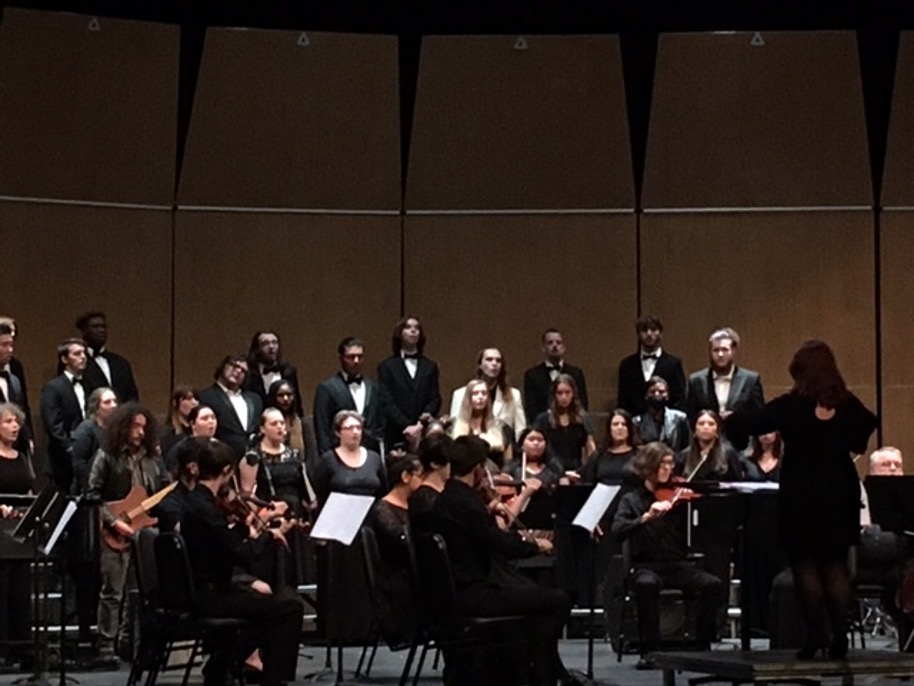 As the fall semester comes to a close and the holidays approach, music classes and ensembles are holding concerts to display their musical talents. The first of these was the Tulsa Community College’s Chamber Orchestra and Concert Choir performance, which was held on Oct. 13.

The orchestra and choir held a rehearsal right before the performance. In between songs, the musicians practiced their individual parts and talked amongst themselves. Then the choir took their seats in the auditorium, and the orchestra, which was the first to perform, warmed up onstage as the audience came into the theater. The orchestra’s two conductors, Heidi Riegert and Sarah Bryant Kleman, took their places onstage, and welcomed everyone.

The concert began with the orchestra’s performance of “Andante Festivo” and Mozart’s “Symphony No. 25.” The next song was “Pavane,” a long and slow ballad, where the musicians plucked the strings of their violins/ violas at the end of the song. Some other songs included “Libertango,” which brought to mind couples whirling on a dance floor, and “Variations on a Shaker Melody,” which started with the wind instruments and then the strings sections joined in.

Then the TCC Concert Choir, conducted by Laura Cowen and accompanied by Rob Muroaka on piano, took the stage. Their first song, “A Prayer for Peace,” was a timely piece with the text of a prayer written by 18th century Ukrainian Rabbi Nathan of Breslov set to music by present-day composer Kurt Knecht. The prayer’s starting line of “Nation shall not lift up sword against nation” was repeated and woven throughout the song, a running current to remind us of the things happening in our world. The next piece, “Three Madrigals,” consisted of three short songs covering young love, heartbreak, and moving on, respectively. The third madrigal was like a song at end of a musical: it was happy and bouncy, echoed the tune of the first song, and gave the impression that the singer had acquired some knowledge through a journey.

The highlight of the concert was the closing performance of Queen’s “Bohemian Rhapsody,” which the choir and orchestra performed together. Several other musicians joined them, playing two electric guitars and the steel drums.

Overall, it was a wonderful free concert, and there are more to come this holiday season!

For more information about events at the VanTrease PACE, visit https://www.tulsacc.edu/campus-locations/vantrease-pace/vantrease-pace-events.