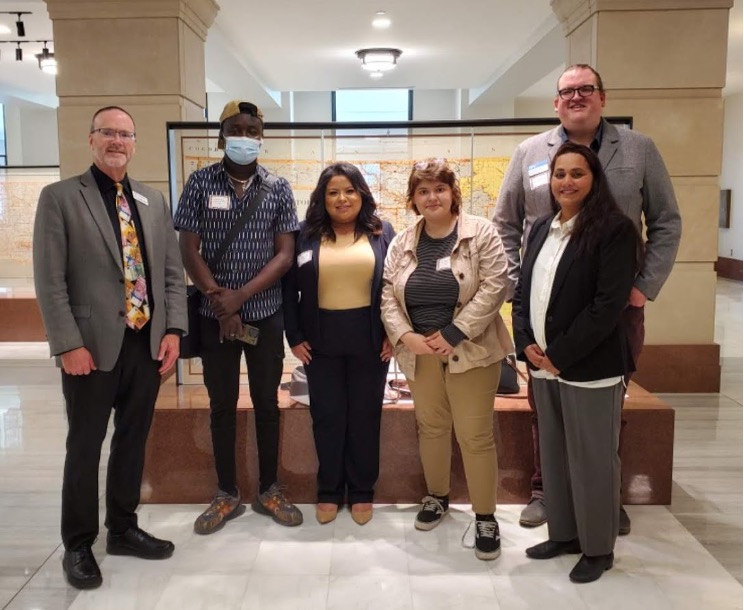 On the marbled floors of the Oklahoma State Capitol, surrounded with students from over 44 countries, all studying in colleges and universities from around Oklahoma, the ISOstudents were there to promote issues important to international students.

The International Student Recognition Day is an effort created by the Oklahoma Governor’s International Team (OKGIT) to recognize international students from colleges and universities across Oklahoma through meeting Gov. Kevin Stitt, Secretary for Native American Affairs Lisa Billy, and more than a dozen state legislators.

Ana Romero Cabrera, a Spanish major at TCC, as to why she wanted to come to the event, explained, “Meeting new people…I want to know more people, so I can make a difference in my community.” As a former restaurant server and now a community college student, Cabrera went into the day to meet with Sen. Joe Newhouse, to advocate for the DREAMers, who are individuals affected by the DREAM ACT, a program that shields undocumented immigrants who came to the U.S. as children from deportation.

Cabrera took the initiative and arranged to meet Sen. Newhouse. When it comes to higher education, Cabrera said to the senator, “I am a DREAMer…and I can’t apply for FAFSA [federal funding for higher education tuition and expenses] or deferral funding scholarships.” To her, the inability to access most scholarships can bar students from pursuing an education.

“We pay taxes…I have been here for more than 17 years, and if we’re doing everything in our power to stay and…[do] not have a criminal record…we should have a chance to get a legal status [as a citizen],” Cabrera said.

Cabrera urged the senator to create laws where undocumented people can receive a driver’s license, which can help students to have access to employment, transportation and gain lawful residency.

Preetiben Dave, a childhood development major at TCC from India, talked about the stress that comes with undocumented immigrants and how her ability to pursue a degree means lifting her community.

The day began with a tour of the State Capitol building. The tour guide explained the symbols behind the State Seal. The symbols represent the Cherokee, Chickasaw, Choctaw, Creek (Muscogee), and Seminole Nations, who are the Five-Civilized Tribes.

Attendees saw the statue of Kate Bernard, the first woman elected to statewide office in Oklahoma, and toured the Senate and the House chambers. The halls had mural paintings featuring the Five Native ballerinas dancing in front of the Trial of Tears juxtaposed against settlers on horseback and trains.

Another state legislator visiting with the student delegations was Rep. Mark McBride. McBride introduced Jalal Farzaneh, co-founder of Home Creations. Farzaneh spoke on how international students pay three to five times as much as residents, and Oklahoma never even had to spend money educating them K-12. Farzaneh, an Iranian immigrant, stressed the incredible opportunities that America has to offer.

Dr. Frank Wang, president of the Oklahoma School of Sciences and Mathematics (OSSM), talked about his experiences in business and how he instructed students for three years for free, prior to becoming a teacher at OSSM. Wang promoted STEM careers and Oklahoma higher education as an ability for students to gain intercultural knowledge even when they go back home.

Secretary Lisa Billy, a former state legislator who is a member of the Chickasaw Nation, started her presentation talking in her native language and explained the Indian Removal Act by Andrew Jackson that forcibly moved Native American tribes to Oklahoma. She explained how even through the relocation, the Chickasaw Nation was able to grow from 8,000 citizens to 80,000 citizens. Billy talked about the importance of creating relationships and serving others.

Finally, when Gov. Stitt spoke, his speech focused on the opportunities available within the state, according to him, “the freest and greatest country in the world.”

At the end of the day, Cabrera was impressed by the diversity in the Oklahoma government and the amount of people willing to hear her story. Dave felt grateful for the opportunity by TCC to visit the State Capitol, and she started thinking about running for office herself. Dave stressed that politicians need to fund and support higher education. Lastly, Paulo shared that the experience of getting closer as members of the organization and meeting other international students was very fulfilling.